Matang is a land of contrasts. It is where numerous mud creeks wind slowly under the endless verdant cover of mangrove stands. A land sheltering clusters of rickety stilt-houses home to generations of fishermen and wood-cutters while serving, at the same time, a refuge for mangrove wildlife. A land whose ecosystem is among the biggest carbon sinks on Earth (1) and yet home to one of the largest charcoal industry in the country (2). Under this paradoxical coexistence, a surprising synergy unveils. This two-part series begins with a visit to the famous mangroves of Matang.
THE MANGROVES 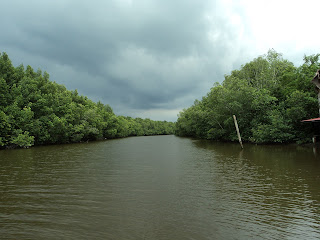 A small river winding among the mangroves of Matang Permeanant Forest Reserve.
The road crossing Matang’s lowlands is peculiarly straight. Lining both sides of the road are the ubiquitous oil palm and the occasional clusters of coconut stands and kampong houses. I strained my eyes to look beyond the blur of passing palms as the car cruises across this unbroken plain, hoping to catch the glitter of mangrove leaves behind the silhouettes of palm fronds, but there were none. At almost 400kmsq, the mangroves of Matang Permanent Forest Reserve are touted as the largest remaining tract of its kind in Peninsular Malaysia (3). But where is it? 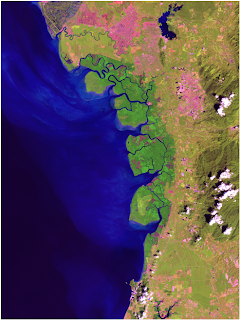 The Matang Permeanant Forest Reserve is an agglomeration of mud-rich estuaries and islands cloaked in mangroves on the west coast of Peninsular Malaysia.
(Picture source: 4)
Turning around the corner at the end of the road, the car came into full view of a metalled lane walled by an unbroken line of tall mangroves and dense undergrowth. The mangroves have been hiding just behind the oil palms all this while, continuing under the uniform shadow of its thick canopy. Standing at around 10 metres, this unusually tall mangrove Rhizophora apiculata has a straight trunk with branches that does not appear until right at the canopy. Its wide-arched prop roots often share the forest with the sturdy buttress roots of the Leggadai, Brugueira parviflora, which resembles the roots of lowland rainforest dipterocarps. Indeed it almost feels like I’m deep in a rainforest as I pulled into the Matang PFR visitor centre. 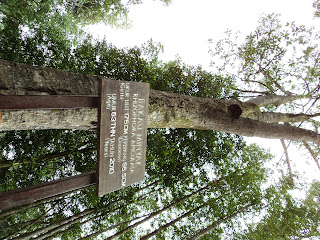 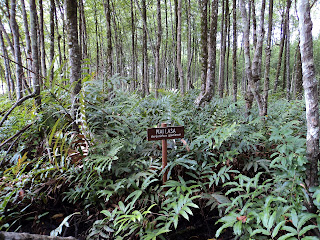 The Piai Lasa, Acrostichum speciosum, is a fern highly adapted to life in the mangrove forest. It is one of the fastest-spreading plants in such habitat and hence, often compete with the planted mangrove saplings (5). 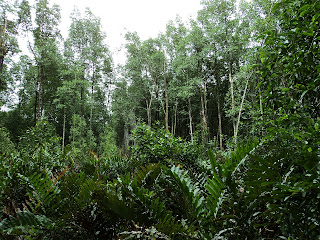 Here is the scene of fierce competition between the fast growing Piai Lasa and the planted Rhizophora saplings. 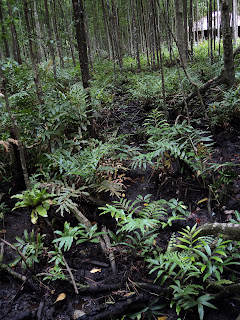 A typical scene in the Matang mangroves. 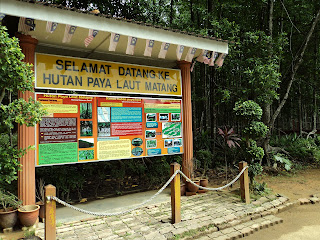 The entrance signboard to Matang PFR boardwalk.
Contrary to the putrid, mosquito-infested mangrove stereotype, Matang turns out to be exceptionally neat and fresh! A newly build boardwalk brings visitors deep into the mangrove forest heartland. Bird nest ferns and giant bracket fungi hang on the trunks and branches while fallen logs scatter among meadows of mangrove fern Piai Lasa (Acrostichum areum), Jejuru (Acanthus spp.) and mangrove saplings. The ground here, having thick layers of fallen leaves across the seemingly dry forest floor with occasional puddles of water, bears uncanny likeness to the rainforest. A chance encounter with a freshly dug puddle of mud no doubt made by wild boars (Sus scrofa) further enhances such an impression. Only a faint whiff of salty air reminds me that I am still in a mangrove, at least for a while. 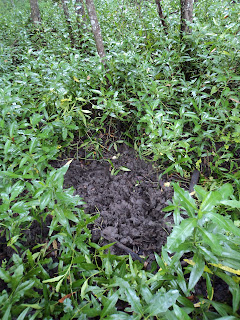 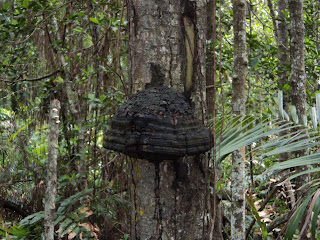 A giant bracket fungi measuring almost half a metre across. 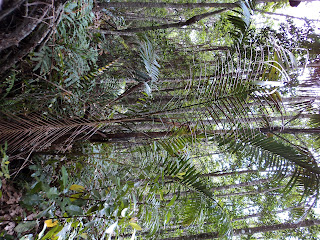 The spike-adorned Nibong, Oncosperma tigillarium, is a common palm in freshwater swamps and lowland rainforests but can also be found in drier parts of the mangrove (Content source: 7). 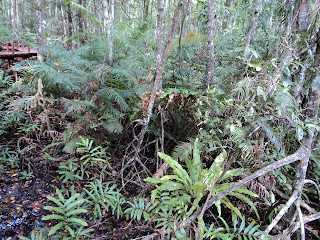 The Rotan Bakau (mangrove rattan), Calamus erinaceus is another peculiar plant related to the Nibong (8). 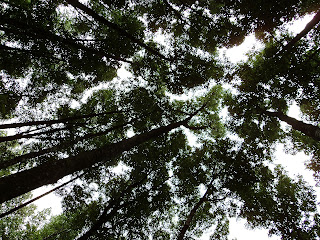 Glancing up to the canopy, I was rewarded with another surprising sight-the crown-shyness phenomena, in a mangrove forest! This is the first time I’ve seen this phenomena outside of the dipterocarp rainforest. It turns out that these were the result of abrasion between swaying branches of neighbouring trees brought by strong winds (9).
Upon closer scrutiny, the ground reveals the marine fauna component of this part of the forest. Grazing on the dead leaves are several species of the peculiar Ellobiid snails. These snails are essentially terrestrial (they are pulmonate snails ie. they breathe air through lungs) in adult form but marine in its larval stages. It requires the tides to wash its eggs into the ocean which its larva will develop and eventually settle on suitable lands in adult form. (10) 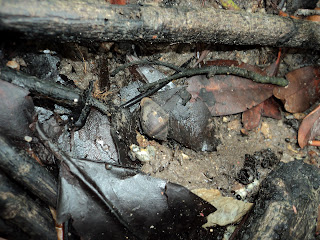 The Banded Cassidula snail, Cassidula nucleus, is a common resident of mangroves. 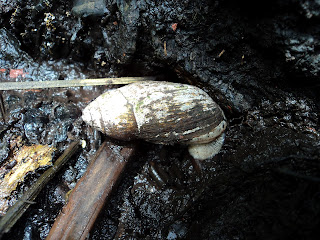 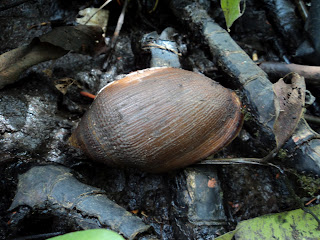 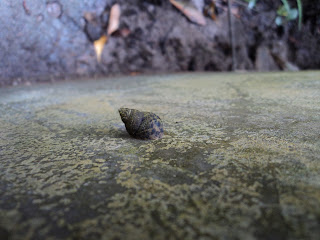 This Spotted Littorinid snail, Littorina scabra is another well-known mangrove snail commonly found way above the water line on trunks or even leaves! Despite it able to survive above water for a considerable time, it breathes via gills (11). 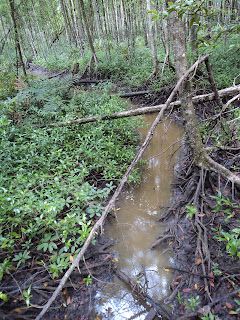 A small stream winds through the thick mangrove forest.
As I wander further along the boardwalk and towards the river, the undergrowth gradually gets thinner. Eventually, only a few straws of saplings remain amongst the mingling roots of Rhizophora. Here, vivid claws of red, blue, orange and yellow male crabs vey for attention among the drab muddy background. But it is not my attention that they are seeking, as I found out when they scurried straight into their pencil-thin burrows in the ground as I approach them. Upon sensing little threat I pose to them, they eventually return to the surface and waver their oversize claws once again. This time, several drab looking female crabs approaches them. I was witnessing a mating display. 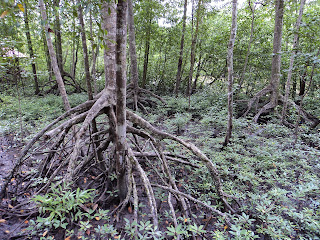 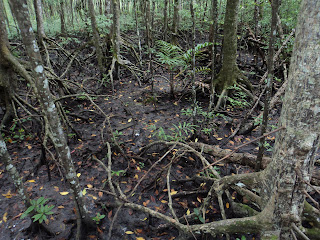 The undergrowth grew thinner towards the river banks. 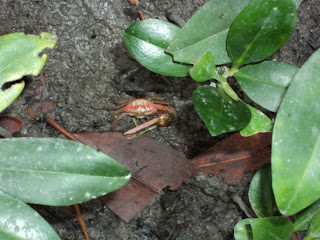 A male Rose Fiddler crab, Uca rosea with its oversized claw.
However, there is one thing about the mangrove forest that is more surprising than others. There are several clearings in the forest and distinct plots with different stages of young Rhizophora, reminding visitors that this is in fact a mangrove silviculture site. Matang PFR has a long history of mangrove forest management stretching back to 1908 and was one of the field sites where benchmark research into mangrove management strategies took place a century ago (4). There are two primary species planted in this heavily-managed ecosystem- Bakau Minyak, Rhizophora apiculata and Bakau Kurap, R.  mucronata. These species are highly sought-after for charcoal production and various structural uses in local communities. 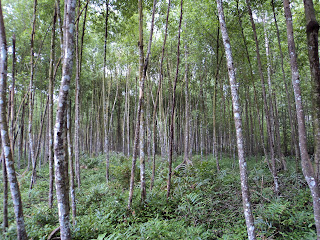 A plot of young Rhizophora trees. 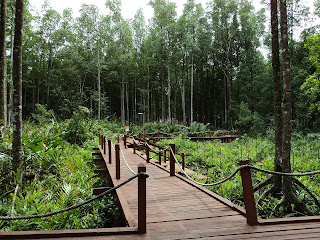 A specific area of the boardwalk built for mangrove sapling planting. 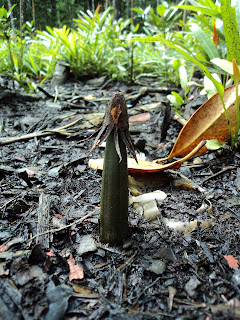 A propagule of the Brugueira. This is the ‘seedling’ which drops from a parent tree after maturing and often ends up lodge in the mud via its projectile-like end. Tidal waters then triggers roots and shoots to sprout into a sapling. (12)
As I rounded a corner and walked alongside the Rhizophora-fringed river, a distant object splashed into the water instantaneously! Adrenalin suddenly surge through me. Thoughts of getting face-to-face with the saltwater crocodile (Crocodylus porosus) flashed before my eyes as I scanned desperately around to catch a glimpse of this rare and endangered beast. Knowing that this is the region where crocodiles were prime game in the 19th Century (13), I am always on the lookout for any of their surviving descendants.  A ripple can be seen on the bank, underneath drooping Nipah (Nypa fruticans) fronds. A reptilian head peeked out from the shadows. Sigh, it was no crocodile but a Water Monitor (Varanus salvator). 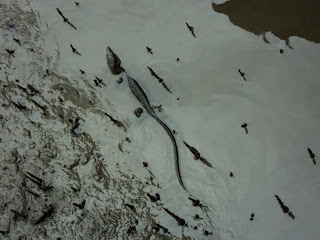 The water monitor, Varanus salvator swimming along the river bank. It is an omnipresent resident of many habitats stretching from the coastline right up into the mountains, including certain areas of human settlements. 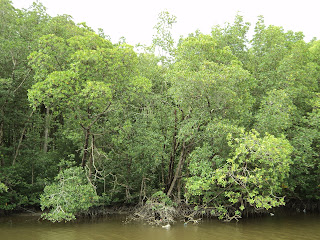 Thick stands of Rhizophora crowd the banks of the river.
Despite continuous disturbance brought on by the silviculture system, it is the biodiversity component that strikes most awe in me. There is no doubt these disturbances altered the natural ecosystem but the resource that contributed to such disturbances-the Rhizophora mangroves, is paradoxically giving the ecosystem a reason to be conserved and be managed sustainably. Inadvertently, this has also buffered various other flora and fauna from ever-encroaching land uses such as agriculture and aquaculture, which have already consumed and heavily disturbed many stretches of this unique ecosystem that exists between the land and the sea.
References:
(1) Ong, JE 1993, 'Mangroves-a carbon source and sink', Chemosphere, vol. 27, no. 6, pp. 1097-1107. (Available from: http://mangroveactionproject.org/files/resources/Ong_Mangroves%20A%20Carbon%20Source%20and%20Sink_1993.pdf )