It's well known that giant ground sloths many times larger than it's present day cousins,the three -toed sloths, existed in the Americas millions of years ago. And then, there're the woolly mammoths that roamed the tundra and large, flightless Moa birds from New Zealand that hides in the shadows of the pine forests. These ancient giants a.k.a. mega fauna became extinct either because of over hunting by early humans or drastic changes that altered their habitats. Today, we can see reminiscence of those creatures in their surviving relatives like the elephants and emus, albeit smaller in size. however little is known about the molluscs of those days in comparison with present day equilvalents. This is especially the case of tropical ones. 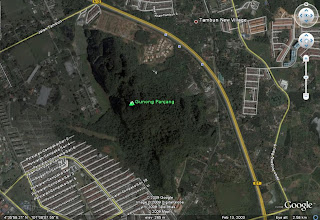 
Days ago, I went to an interesting rock painting site known as the Tambun cave Paintings, east of Ipoh,Perak. It is one of the handful of rock paining sites in Malaysia. Dating back to some 2000 years ago, these paintings were made by primitive people of the Neolithic period. On the walls are scenes of hunting of animals like dugong, tapir and other mystical wildlife. What's peculiar is the presence of dugong because this particular location is approximately 50-60km from the nearest coast. Furthermore, with such natural heavy siltation from large rivers even a few thousand years back, this part of the malay peninsula didn't looked like a suitable habitat for the marine mammals. So, how did these ancient people came to know the dugong?

Now, this is even more interesting! Last year, a local daily reported that arecheaologists discovered large quantities of seashells eaten by the Neolithic people (see: http://thestar.com.my/news/story.asp?file=/2006/12/4/nation/16216494&sec=nation). I was baffled. After I visited the cave and located some specimen, I found the answer. The shells aren't marine after all! They are the freshwater snail Brotia costula varicosa (Troschel 1837). This species still survives today! But what draws the line between the present day specimens with the past ones is their size. 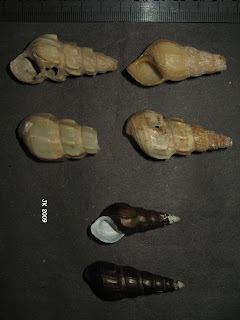 The ancient fossils (without the black periostracum) are much bigger than the present day ones (with periostracum).

On another occasion, I found a dozen of similar sized Brotia costula varicosa under a cave opening facing a natural freshwater pond of Kek Lok Tong in Gunung Rapat,Ipoh,which is quite a distance away from Gunung Panjang. Thus, it is possible that the ancient giant Brotias used to be widespread across the Ipoh region thousands of years ago. 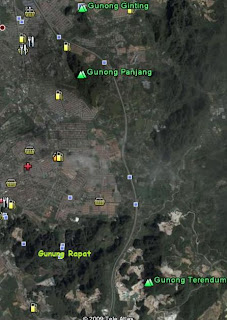 The distance between the two mountains is rather far.

Similar findings of Brotia c. varicosa was reported in many archealogical sites like Lenggong, Kelantan and Terengganu although size wasn't mentioned. 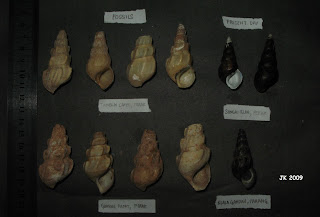 Comparison of size of specimens from different localities.


So, does this have any relationship with the mega fauna extinction. Perhaps it's an extinct bigger form of the brotia costula variocosa?