ON FISHERMEN AND THE CHARCOAL FACTORY 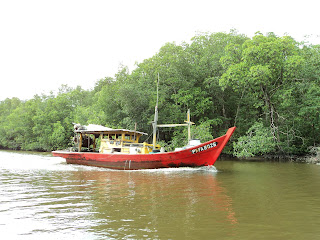 A small trawler boat crusing by the mangroves of Matang. 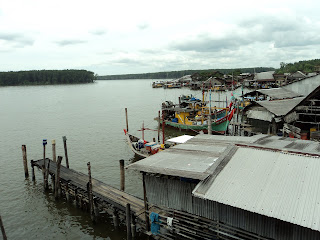 A view of Kuala Sepetang fishing village.
Afternoon sees the placid brown rivers of Matang disturbed by incoming fishing boats. The chugging engines tear the calmness of the air previously dominated by whispers of heated updrafts carrying rounds of white bellied eagles (Haliaeetus leucogaster) high in the sky. Crab and prawn pots can be seen stacked highly on these smallish boats. As their bows swing towards wood-planked berths stretching out into the waters from village and warehouses, workers on the boats pulled out blue drums loaded with the day’s catch. The berths were lined with people readying to pull the drums up with metal hooks and strong muscles. The cued thud of the starboard on the berth signals a synchronised hauling of the catch from the deck to the berth in minutes. Once all catches are landed, the captain reverses the boat and head out once more to the sea. In a small frame of time, the fishing village of Kuala Sepetang laid its hands on another couple of tonnes of crustaceans. 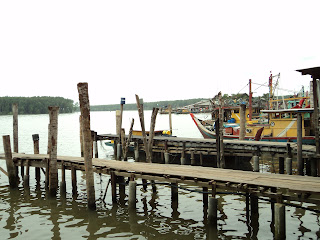 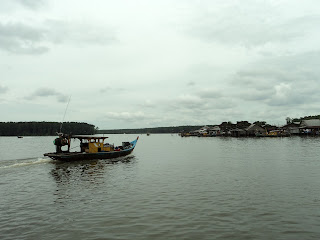 A boat heading out to sea.
The livery of Kuala Sepetang’s fishing industry for the last 200 years (1) is an enduring testimony of the importance of ecosystem services provided by the mangroves. Mangroves are major nursery grounds for many fishes that inhabit the open waters of the Straits of Malacca (2). During breeding seasons, commercially important fishes such as groupers (garupa; Epinephelus), catfish (keli; Arius), snappers (ikan merah; Lutjanus) and rays (pari; Neotrigon) head into its murky waters to breed (2). The tangled roots and restrictive channels kept large predators away from the vulnerable young fry while they develop into adults. 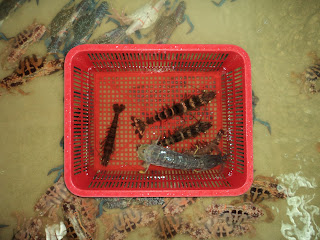 A selection of crustaceans such as flower crabs (Portunus pelagicus), mask crabs (Charybdis feriatus), tiger prawns (Penaeus monodon) and a mantis shrimp (Harpiosquilla sp.) found often near mangroves.
These fishes also share their homes with a myriad of other mangrove residents. The celebrated dried shrimp (Acetes spp.) spreaded on the verandas of village houses, drying under the tropical sun, came from the same habitat as the fishes. The greenish-grey mud crabs (Scylla serrata), bounded and packed in rattan baskets were taken from mud banks in the wake of receding tides. 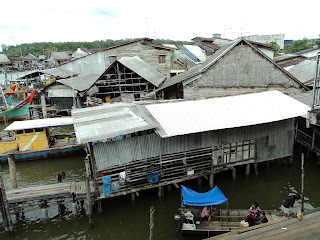 The blood clam (Anadara granosa) is a common mangrove mollusc with characteristic red blood (haemoglobin) which aides in its respiration of dissolved oxygen when the tide is far out from its mudflat habitat (4).
Blood clams (Anadara granosa), an indispensable companion of many Malaysian seafood dishes, clang by their thousands in spinning metal clam-washers. Impurities falling out of the washers form a mound beneath it. This is a mix of spiny murex snails (Murex occa, M. trapa), tiger moon snails (Natica tigrina), rock shells (Thais lacera) and sea cucumbers. The first 3 species are blood clam predators and are also increasingly popular on the menu of seafood lovers. This lot is undeniably a section of the mudflat community, which is a unique ecosystem formed by the deposition of nutrient-rich mud on the seaward side of mangrove coasts. 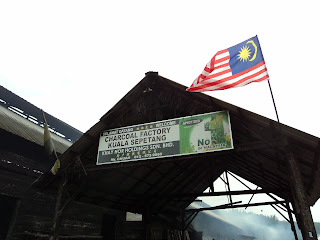 
Seafood is not the only major industry in Matang’s mangroves. The continual management of mangroves is motivated by the well-known charcoal industry for centuries. The Khay Hor Charcoal Factory is one of the charcoal producers. A tangy vapour of burning mangrove wood greeted me as I was taken a tour of the factory by veteran charcoal-producer Mr. Chuah Chow Aun. Boats holding mangrove logs from allocated logging plots cruises into a canal and unload their cargo. Here, they are processed into charcoal via slow burning in large traditional clay kilns. In the process, strong vapours emitted from the kiln’s outlets are condensed into tannin acid, commercially used for tightening leather but locally used as mosquito repellent. Mr. Chuah explains that the charcoal produced from Matang’s Rhizophora is dense and odourless, a quality attribute that is reflected by the high demand for his charcoal in Japan. 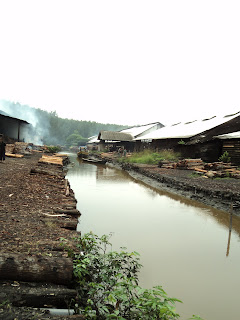 The canal where the unloading of mangrove logs takes place. 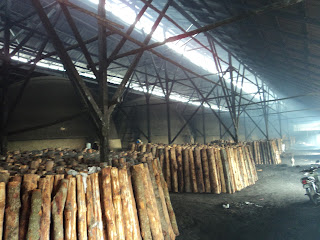 The kilns where mangrove logs are traditionally processed into charcoal. 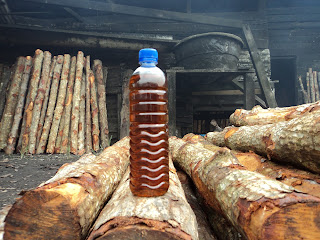 Dark coloured Tannin acid is a byproduct of charcoal production.
The abundance of useful species is an important lifeline for the people of Kuala Sepetang. However, these are but a handful of species in the midst of the thousands of others which are very much ecologically-intertwined with them. Mangroves as a whole are an integral part of the tropical land and seascape. Its presence gave rise to a unique ecosystem which in turn, influenced other seemingly unrelated ecosystems such as coral reefs and seagrass beds (2). At a time when Malaysia is increasingly losing its mangroves (3), it is crucial to ensure that Matang's mangrove ecology and interactions are not destroyed or altered significantly under such intensive resource harvesting.  As any visitors will realise, the cultural and industrial successes of Matang hangs on the ecological balance of its mangroves. 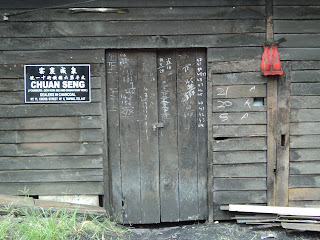