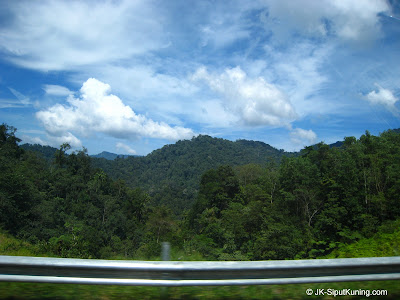 Rolling hills of verdant rainforests as seen along the East-West Highway which divides the Belum-Temenggor Rainforest into two large, separate portions.
Time and again, we have been reminded of our surprisingly little understanding of and exploration into the natural world. New species kept spewing out from scientific expeditions and personal discoveries while chainsaws and heavy bulldozers raze kilometres of the world's remaining natural ecosystems.

This scenario is no stranger to the Belum-Temenggor Rainforest Complex, which ranges from lowland hill forests in the valleys to tropical montane rainforests up on the cloud-draped highlands. This time, the new species comes in the form of a snail, a not-your-average forest snail. 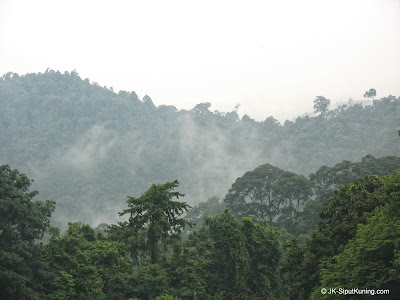 Morning mists roll up the tree-cloaked hill slopes in Belum-Temenggor's montane forests.
This precious 300 square kilometres (300000 hectares) block of rainforest houses a multitude of ecosystems that very much represents almost the entire cross section of Peninsular Malaysian biosphere save the coastal region. Thus, it comes as no surprise that the last representatives of the Malaysian megafauna seek refuge in its verdure including the highly endangered national icon, the Malayan Tiger (Phantera tigris jacksoni). The same can be said for almost every group of rainforest flora and fauna in the Peninsular. However, it is a cherry-sized snail that particularly surprised Reuben Clements, a researcher of Malaysia's mammals and molluscs, late last year.

Having spent most of his time working under humid tropical rainforest conditions while tracking the elusive Asian Elephants (Elephas maximus), encountering a snail was not something he had on his mind. But what an unusual encounter it was! Clements recalled his team were looking out for fresh elephant faeces when they chanced upon lumps of mud brown globes (their target). Breaking the freshly laid, cellulose-laden "cakes", he scooped and inserted a portion of it into clear plastic bags for analysis back in the team's laboratory. In the process, something gleaming on the surface of the pachyderm droppings caught his attention. It was a white object with a distinctive brown spiral embedded in the sticky brown lump. He instantly recognised it as a snail. A snail fragment, probably. After all, how could a tree snail end up deep in elephant dung if not for it having been through the gnawing of tree leaves and passing around the mighty pachyderm's digestive tract?

Either way, curiosity overcame speculation and Clements decided to remove the snail from the fecal matter for a closer look. It turned out not to be a shell fragment nor an Amphidromus snail (which is often the case for Malaysian tree snails)! In fact, this snail is so out-of-place as far as current malacology is concerned.

Featuring a blunt apex with a fairly tall and convex spire, a rather sharp kneel, a slight depression on the final whorl before the lip, a thick, angled and flared lip, as well as a covered umbilicus, this yet-to-be-named snail is hauntingly similar in many ways to its New Guinean Camaenidae snails (a.k.a. Camaenids). It has a porcelain white background and a yellow-brown periostracum. Furthermore, the narrow brown band that spirals at the periphery for the first 3 upper whorls and the thick maroon band that adorns the periphery of the base as well as a narrow pink inner banding further reinforce its similarity to its New Guinean counterparts.  Such distinct characteristics could hardly be of mainland Southeast Asian origins! 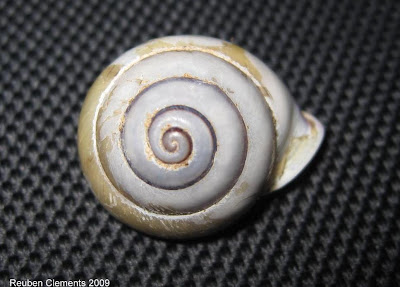 A dorsal view of the new snail's shell. (Photos courtesy of Reuben Clements) 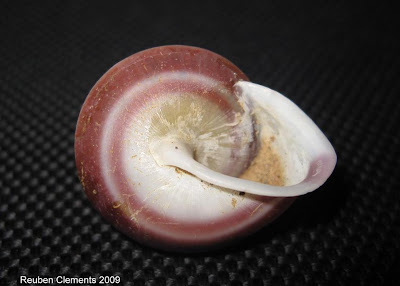 A basal view of the new snail's shell. (Photos courtesy of Reuben Clements) 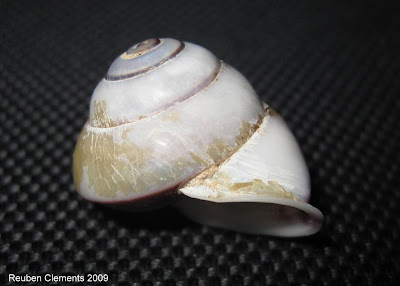 A side view of the shell showing the pronounced kneel and thick, flared lip.
(photos courtesy of Reuben Clements)
The question now is (or rather, are): Where exactly does this snail fit into the general picture of mainland Southeast Asian's (or more accurately, Sundaland's) molluscan fauna? What is its origins? or if it is as speculated, how did it came to Belum from New Guinea? (or is it the other way around?) What about the assumed migration barrier called the Wallace Line? Are there any similar shells elsewhere in the region? etc. etc. An avalanche of questions began.

Clements suggest that it could be related to the family Acavidae, which stems from Gondwanan ancestors. Gondwana is an ancient supercontinent that split up some 167 million years ago in the mid-Jurassic into fragments that include South America, Africa, Australia, New Zealand, Antarctica, India and even parts of Thailand and Pulau Langkawi in north-western Peninsular Malaysia. Since the last two locations mentioned are within hours from Belum-Temenggor, this hypothesis does seem plausible. I believe it belongs to the family Camaenidae and its morphology has some resemblance to the genus Ganesella which resides throughout much of Sundaland's highland forests. or could it be a remnant population of a once widespread genus stretching to New Guinea? Perhaps it was stranded during the abrupt climate and sea level changes of the Holocene Epoch (12000 years ago)?

Either way, such specimen warrants attention by not just malacologists but nature lovers and conservationists as well. We are not only dealing with a new species but probably an entirely new genus or even an extension of New Guinean wildlife into mainland Southeast Asia! If one of these speculations turns out to be true, this little snail may be the one of the few (if any) molluscan evidence that links Malaysian flora and fauna to the ancient Gondwanan supercontinent; or place Belum as the only remaining forest holding Southeast Asia's ancient fauna; or bridges Sundaland's molluscs with the Sahul Continental Shelf (Australia and New Guinea).

In the meantime though, Clements is still working on mammals in the Malaysian rainforests. "We need to find a living snail in order to get to the bottom of this mystery," he remarked. Until then, questions will prevail and the snail's future will stumble along with the uncertainty of Belum-Temenggor's rainforests.

It certainly does resemble one of those lovely New Guinea papuinids. There's a vague air of Helicostyla-ness about it too.

I hope some live specimens turn up soon. Should be an interesting story, whatever the outcome.

Hi,nice and interesting pictures.. i liked..

Snail, indeed I agree the shell might be related to the Philippines' Bradybaenidae ,notwithstanding the fact that Belum-Temenggor is across the South Chine Sea.Eventually, only a live snail will provide the definitive answer.

Dejemonos sorprender, the snail is indeed interesting, both aesthetically as well as scientifically.

My name is Ben, and I just wanted to say how much I enjoyed your blog! Your pictures are beautiful, your science is really interesting, and your writing is excellent.

I'm an aspiring marine biologist/ecologist, and I just began writing a blog about ocean conservation and scuba diving.
I lived in Thailand for the last year (now I'm back in America, where I'm from), and I spent a lot of time traveling in Malaysia. One of my first posts was about the geological reasons that diving at Sipadan is so great, and in researching that question I came across your blog. Your post on Sabah's geologic history was very informative, just like all your writing.

Keep up the great blogging, and I hope you fulfill your dreams of becoming a malacologist!

Thank you for all your kind comments!

I enjoy your blog and the blog post about Sipadan too. Good to hear you enjoyed your trip to the island. It is truly a magnificent place and a must-see for all who aspire to be a marine biologist/scientist!

Can't wait to check out your next dive blog post! :)

Hello,
I want to ask you
I found before 20 years when i was a kid one snail fossil like acavidae.Its about 4-5 cm and is hard stone.Is very old.Is the only one snail whe i look on the internet that lines of the snail much with my.I found this in Greece.

I'm afraid I'm not familiar with snails from Greece. As far as I'm aware, there is no Acavidae members near Greece. However, based on the geographical location you've given, it is possible that it could be a fossilised Helicidae.