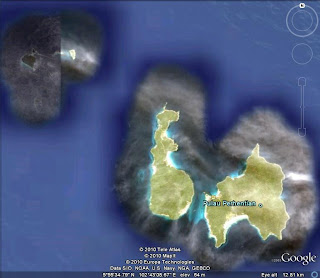 The Northern most archipelago of the East Coast of Peninsular Malaysia, Pulau Perhentian (meaning: Stopover Islands) consists of the smaller Pulau Susu Dara in the North-west and the two larger islands of Pulau Perhentian Kecil (centre) and Pulau Perhentian Besar (South-east).
Rarely seen nudibranchs, countless seahorses anchoring on every protruding object on the seafloor, strange stares of frogfishes shrouded by soft corals. Such encounters on a single dive are every diver's and macro-photographer's dream especially those that have been touched by the amazing diversity of macro-life of Lembeh Straits in North Sulawesi, Indonesia or the increasingly popular Bali "black sand" dive sites, among many other localities.

However, discovering such a site in the North-eastern corner of Peninsular Malaysia sounds like an impossible news! After all, one can obviously see the distribution of muck-dive sites fitting well within or in the proximity of the Coral Triangle region: Bali, North Sulawesi, Semporna Islands, The Philippines, Eastern Indonesia, Timor, Papua New Guinea and many others. So, is it plausible that such sites exist far beyond the Coral Triangle? 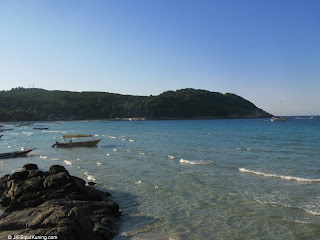 The gin-clear waters of Pasir Panjang(Long Beach), Pulau Perhentian Kecil.
That was what our group responded to when our dive guide made his 2-year-old discovery known over a scrumptious dinner. It had been a tiring and fruitless dive off the coast of Pulau Perhentian Kecil that afternoon; We found nothing but silt and dead corals with an occasional, meagre covering of polyps on half-smothered whip corals. His account of that dive was a revelation. 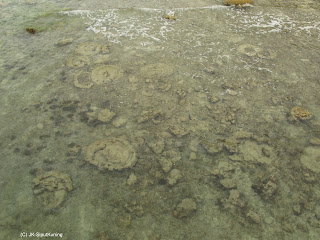 The dead and destroyed coral heads along Pulau Perhentian Kecil's finging reef system: a direct victim of indiscriminate use of boats on shallow reefs.
The next day, arming with depth detectors and enthusiasm to the brim, we found ourselves navigating away from a small-headland off the coast of Pulau Perhentian Kecil at a snail's pace. With the boat engine chugging at high decibels, our dive guide told us from the top of his lungs how difficult it is to locate this site. It's little wonder as this mini sea mount, a smallish peak of an underwater dune, is quite a distance from the island and is under 28m of churning water. 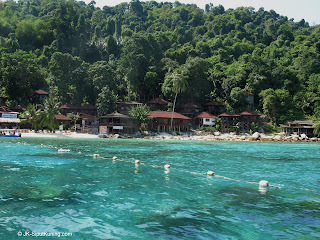 The beautiful morning in Pasir Teluk Aur, Pulau Perhentian Kecil on the day of our dive.
Strong currents sweeping from the mainland 20km away constantly brings high levels of silt and nutrients to the sea mount, which contributed to the diversity of the benthic (bottom-dwelling) organisms. The currents, however, could be a bane to divers as well. If we were lost somewhere between the surface and the bottom in the currents, we could end up surfacing off the shore of Kelantan or Pattani in the North, or worst, in the middle of South China Sea!
Finally, the depth detector beamed a 28m reading and we scattered off gearing up our equipment before plunging together into the cerulean waters. The first few minutes seemed forever, as we fought arduously against the current while trying to maintain contact with others in the group under rapidly declining visibility.
As visibility came close to 3 metres, I have finally hit the sea bed. A quick survey indicate a terrain not unlike typical muck dive sites: a silty carpet of crushed and piled shell-rubble. There are no hard corals as the turbidity of the water discourages growth. Only some turfs of soft corals Sceleronephyta sp. were found.
A more detailed scanning of the area revealed overturned soft corals and highly disturbed sea bed. A glaring trail of destruction left by trawlers, and it's within the Pulau Perhentian Marine Park perimeter! Somewhere at the back of my mind, I was contemplating the possible incursion of seahorse fishermen into restricted territory were fueled by the growing demands of the traditional medicine market. This is the case for the once abundant populations of seahorses elsewhere around the Peninsular, as some studies have shown (see reference). Were the Perhentians already under pressure from such unsustainable fisheries?
Putting such preoccupations aside, I scoured the sediment loaded bottom for interesting critters that we were after. After several strokes of my fins and I am face to face with my first find. 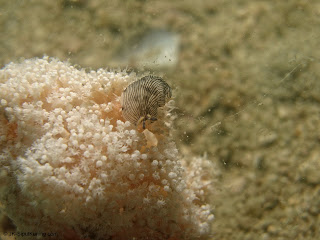 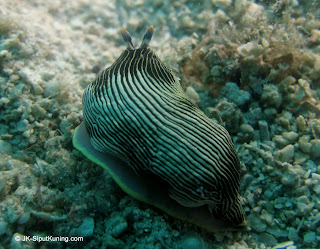 Just an arm length away, a much larger specimen of the same species was seen foraging for it's well known prey-The Sea Pen. 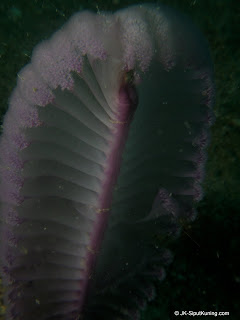 Indeed, just a metre away, lies a fully outreached Sea Pen, Virgularia sp., capturing plankton with its feathery filters called rachis.
As we continued exploring, a fiery pompom like organism crawling on the sand caught my sight. As I was about to maneuver into my photographing position when our dive guide frantically signaled me over to his side! It was the same critter I saw moments ago. This time I could get a closer look at its features. 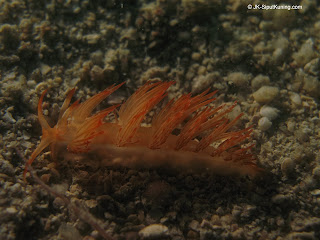 It's Rory's Flabellina, an unidentified nudibranch (but with a common name) first discovered
also in Perhentian and recorded in the Great Barrier Reef as well. 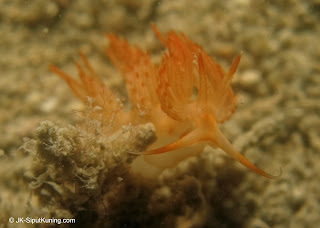 We counted another two, then three and more all around the vicinity! They seemed to be common in this locality! 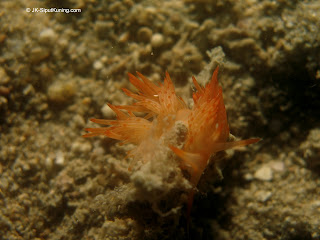 The backs of these nudibranchs are covered with "pompom" like structures known as cerata which could be detached from the body like the tail of a gecko, when harassed.
We were ecstatic by now, scrambling around and fixing our eyes on the shell grit carpet. We saw some bristle worms, Chloeia sp. common to such silty habitat. In addition to that, a scurrying heart urchin caught our attention as well. Most divers are familiar with the usually sessile or passive Diadema Urchins, Diadema sentosum. However, it is a rare privilege for divers to observe the rapidly moving bristles of this particular heart urchin has utilised in its movements. 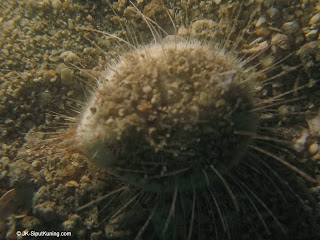 The Heart Urchin, Eurypatagus ovalis, is a rare sight on most diving occasions as it mostly inhabits sandy and muddy substrates away from typical dive conditions.
As we were busy with our own finds, our diver guide signaled us for the critter we have been crying for. 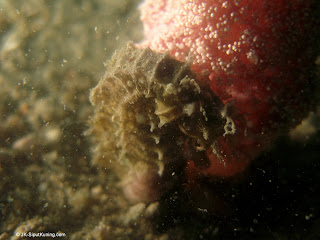 Clinging tightly to a clump of Sceleronephyta sp. soft coral, is the timid Spiny Seahorse, Hippocampus spinosissimus. We cautiously moved around it so as not to over stress it.
After some photographing, we proceeded on.
Scanning various other possible microhabitats, we discovered some equally interesting crustaceans and their camouflaging behaviour. 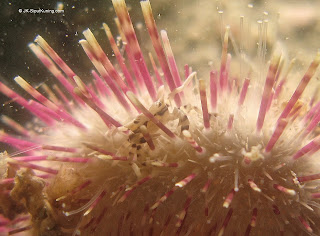 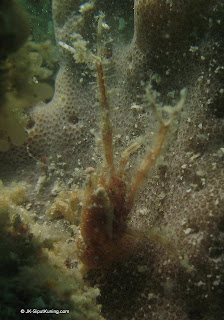 Another tiny denizen of soft corals is the Squat Lobster, Galathea sp. . Contary to it's name,
this critter is more closely related to hermit crabs than lobsters. 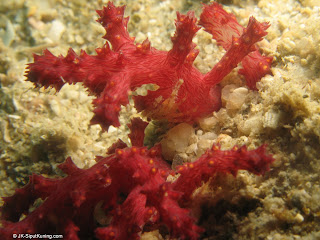 Another well camouflaged soft coral-inhabiting Procelain Crab, Lissoporcellana sp. hiding under the branches of Dendronephyta sp. at the centre of this picture.
As my air gauge closes in towards the 100 bar, I made the last dash to locate as many critters as possible. I have managed to find some more interesting slug species: 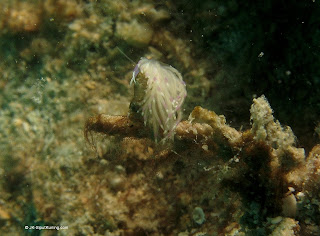 A cousin of Rory's Flabellina, this is the Red-lined Flabellina or Flabellina rubrolineata displaying its own set of violet-tinged cerata. 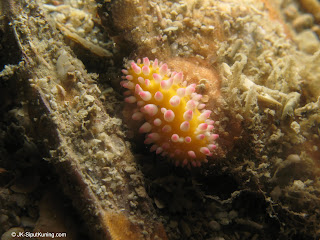 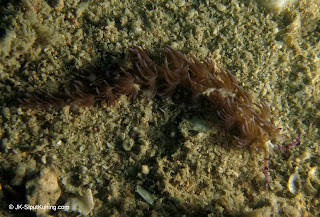 The widespread yet photogenic Serpent Pteraeolidia, Pteraeolidia ianthina, always equips itself with stinging cerata to ward off predators. 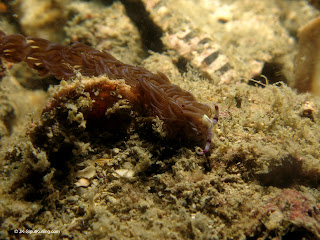 Sometimes, symbiotic single celled organisms called zooxanthellae can be found within the cerata, synthesising food from sunlight to supply its host. 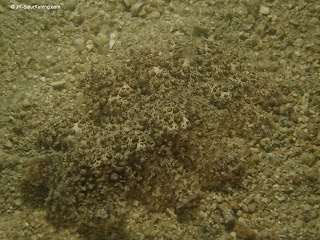 On first sight, this may look like any unassuming patch of sand and grit. 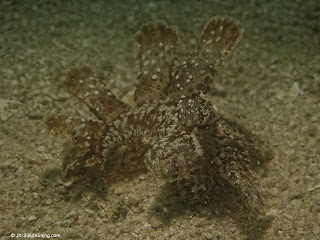 However, a slight current generated by one of our unsuspecting diver revealed the 20cm long Wonderous Melible, Melibe mirifica ! I'm elated having never seen such a giant nudibranch before.
With 28m of water above us and our limited air reserve, we motioned everyone to start a gradual ascend up the water column. As much as we were unwilling to leave such a productive site, the discovery did not end there! Midway up the ascent, we chanced upon many rarely seen planktonic tunicates! This includes the swirling, snake like Colonial Salps, which is a chain of pelagic tunicates and the other are large (~10cm), solitary individuals simply known as Salps. And perhaps the most interesting part is: These two are of the same species! They are simply in a different stage of life. (Check out this link for more information) 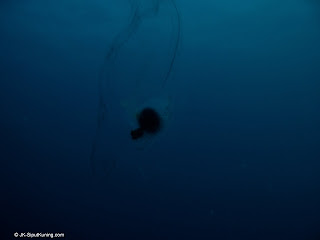 Photographing the almost transparent solitary Salp, Salpa maxima, is a great challenge and the best shot I could obtain only shows its outline.
After 50 minutes of exhilarating discoveries, we emerged out of the water and beaming with smiles. There's still something to look forward in Pulau Perhentian after all! The corals and water visibility may not be comparable to those of many other East Coast Islands but Pulau Perhentian offers an alternative that is worth exploring, at a comparably lower cost than established muck dive sites elsewhere.
However, it was a rather bittersweet moment for us too: The absence of frogfishes and the scare number of seahorses we saw was a world way from what our dive guide first set his eyes on years ago. This confirmed my initial suspicion. Clearly, some fishermen have been breaching deep into Pulau Perhentian Marine Park. They have been plundering the last populations of seahorses to satisfy the unsustainable traditional medicine market.
As our boat chugged back to the dive centre, a flotilla of trawlers emerge over the horizon, heading towards the islands. Are we willing to lose this invaluable asset again? 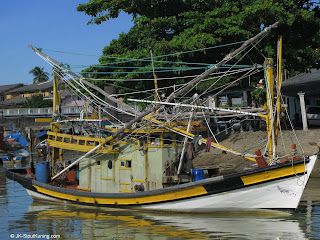 Wow, what a great time you had off Perhentian. Love all your pics, especially the Wonderous Melible. And the salps are what I hope to see underwater one day. I must dive Perhentian some day!

Thanks Chai, for your heartwarming comments! I hope I'll be able to post more photos soon. Thanks and enjoy your explorations!

Very nice nudibranchs; unlike snails these animals can only be appreciated in photographs or in life. The Eurypatagus is also very interesting, I've never seen any with the spines intact.

Indeed, DPC. Looking at wildlife when they are alive is much more interesting than dead ones!

Thanks, Luuuuuua! Underwater photography is indeed a very interesting way to document the marine life!