Nestled atop a typical creeper-draped hill on the side of the busy North-South Highway is a hidden cave with a secret that would entice anyone who stumbles upon it...... 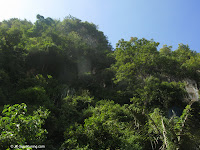 
As our group (a motley crew of nature lovers and adventure seekers) turned around a strangely silent and empty road with cow manure scattered across it in an industrial park, a small limestone outcrop emerges from behind the metal roof of a warehouse - Gunung Pua (Pua Mountain, which actually is more like a hill) is just a hundred metres away. We pulled into a sandy, uneven road flanked by grass and shrubs typical of Kinta Valley's post-tin mining terrain. A few bumps and splashes of water and we have reached the foot of this forest clad hill. Creepers droop down from the cliffs, blanketing their rugged features from view. Peculiarly low trees and shrubs with patches of bamboo colonies occupy the upper reaches of the outcrop. Perhaps they are signs of human disturbances or forest fires sometime ago? 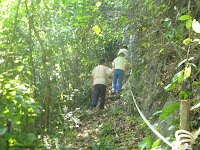 Trekking up the steps towards the cave.


Our guide made a headway by slashing the undergrowth that covered much of the path leading up to the cave. Rocks have been placed in a manner that resembles a staircase along the steep cliffs. It must have not been used for ages. But who built it? What's the purpose of it? Taking my mind off that matter for a moment, I scanned the boulders and strange rocky features for rare and endemic plants and wildlife. 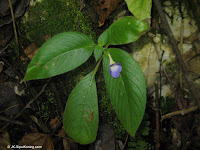 This herb with blue fowers must be a limestone-endemic. 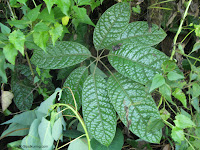 The peculiar leaf of another plant. 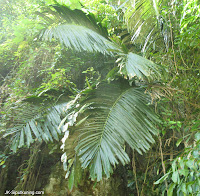 This palm is probably rare and endemic to limestone forests of Kinta Valley.


A cluster of plants with elongated leaves and bluish flowers attracted our attention. Further up the cliff, a large palm and another peculiar plant with paw shaped leaves adorns the understory section of this forest. They must be rare limestone-loving plants, found only on this hill and probably the nearby ones. 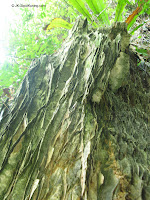 A strange yet beautiful rock formation. 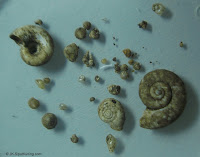 
Mosses covered most of the exposed limestone with one little outcrop having flaky, vein-like protrusions across the surfacing reminiscent of Salvador Dali's surrealistic sculptures. There were visibly no large snails around, so I proceeded with collecting a bagfull of dirt at the base of the rockface for microsnail examination back at my "home-lab". We continue up a forest clearing with regenerating shrubs. Before long, the path's bushes gave way to rock and dirt. Looking up, large stalactites encrusted with green algae hangs from a wet, carved rock ceilling above. We've reached Gua Naga Mas which literally translates as Golden Dragon Cave in Malay. Guano spread across the floor into the dark end of the cave chamber where a flight of algae-green, slippery stairs leads to a long abandoned Chinese temple. According to the book "Kinta Valley: Pioneering Malaysia's Modern Development" by Khoo Salma Nasution & Abdur-Razzaq Lubis, this temple and the stairs seen earlier was built in the 1800(?) when the valley below (known as Tekkah) was a hotbed for tin mining activity by the Chinese. A tin economy slump soon brought the industry to its knees and thus, workers abandoned the area including this cave temple. This makes it almost 2 centuries old! The stillness of the air added an eerie feeling to this abandoned religious site. 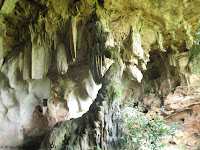 Beautiful speleoterms at the entrance of the cave. Note the large stalagmite in the centre resembles a sea lion. 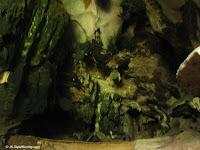 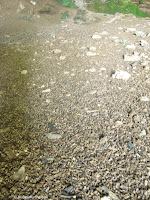 Loose guano (bat droppings) on the ground across the cave indicates it has been relatively untouched by man for a long period of time.


However, it is not this temple that is the most interesting here. We'll leave this to the athropologist to explore instead. Following our guide up another flight of steps to a smaller chamber off the main cave, we gazed across the rock wall, anxious to catch a glimpse of the well-known attraction. Up here, the limestone abruptly gave way to irregularly shaped brownish ancient mud deposits stretching up to the chamber's roof with occasional exposure of the underlying limestone at eroded and fall-off chunks areas. We used torches to assist our search. An area close to the roof sparkles and shines under the beams of light emitting from our torches. This is the main highlight and the namesake of the cave - an almost complete set of mammalian fossil embedded in the drab rock. It was first discovered by the Malaysian Nature Society when they were on an expedition to survey karsts of Kinta Valley. Since then, there were many views to its possible species including mountain goat, leopard and wild cat. However, no positive identification can be obtained yet as the skull and many other parts are half embedded and eroded. Besides, there's little interests in researching the bones to date.

The mudstone encrusted chamber where the fossil was found.

A general view of the mammalian fossil. Note: the eroded skull below the piled up front limb bones at the bottom-left section of the picture.
After spending some time speculating about its species, I decided to scour the ground instead for other interesting critters. Sure enough, I discovered a "stone-anvil" commonly used by predatory birds to crack snails' shells for their meat. There are also some bat bones nearby, which probably means this cave is home to bat colonies although none have been spotted during our presence there. Another pleasant discovery, a first for me, is a rock containing brochiopod or bivalve like fossils stacked under a pile of limestone. 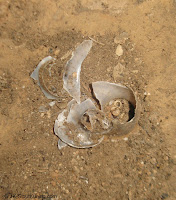 A predatory bird's victim Cyclophorus malayanus (Benson 1852), smashed into pieces on a rock. 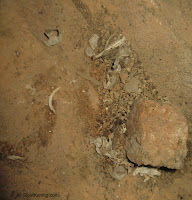 Bone fragments of a bat lying on the dry cave floor.

A fossil embedded rock, probably a group of bivalves or brachiopods. 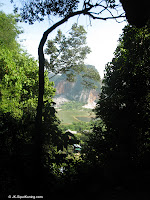 The sun soared over the hill and it was time for us to bid farewell to this fascinating cave. As we decended, the midday sun shines upon the taller karsts at the distance, exposing vividly every hue of the blasted limestone cliff and reminding us how fragile these beautiful hills are. Hopefully, this rare natural heritage that could be of huge significance in national and regional paleontology will be protected and preserved indefinitely.

Some articles and reports of similar interests:
1.Star Metro (Wednesday October 7 2009)- Good Lord! It's a leopard!

4. Adi Taha Harnessing Science and technology for preservation and conservation of cultural heritage of Malaysia, Department of Museum and Antiquities.

After some research on the internet, it appears that the unidentified blue-flowered plant ( http://2.bp.blogspot.com/_7WkXDhKBS-Q/S1kjCYtB8pI/AAAAAAAAAfA/TxmGeIxckxY/s1600-h/IMG_9214+new.jpg ) could be from the genus Chrita.

However, no confirmation could be made at species level. The closest, most similar species is the unidentified specimen from Phuket, Thailand.see: ( http://www.botanickateplice.cz/foto/detail/?f=1704 )

Please let me what's your opinion. Thanks!

Update: It is Chirita caliginosa and is found on limestome across Perak, Selangor and Pahang on the Peninsular, as well as in Kuching, Sarawak.