"The water in the river is very cold but clear as crystal. Gunong Gaja (sic. Gunung Gajah) comes close down to the river and overhangs. It comes down about 100 feet sheer. It is very striking with caves and stalactites. It must be photographed."
-J.W. Birch, First British Resident of Perak. 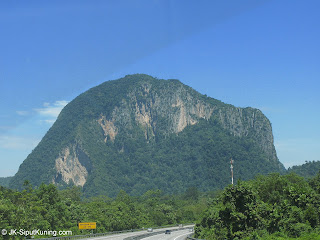 Gunung Tempurung as seen from the North-South Highway.


For centuries, Gunung Gajah-Gunung Tempurung complex has fascinated travellers and locals alike. Early Sumatran settlers believed caves in these huge mountains are adobes of genies while western explorers noted and surveyed the karsts' geology, archaeology and biodiversity in awe and wonder. Today, tourists flock to the most well-known of the caves, Gua Tempurung, to get a glimpse of the wonderful stalactites and stalagmites it has to offer. However, little is known about the other dozens of caves that lie off the beaten path. I am about to step into one of them. 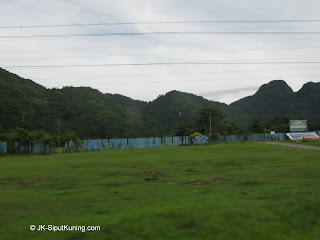 
Being 6km long, the G. Gajah-Tempurung massif is the largest and southernmost karst in Kinta Valley. Gunung Gajah's summit is 372m high while G.Tempurung's southern and northern peaks are 612m and 497m respectively. This makes G.Tempurung one of the tallest karst in Peninsular Malaysia. To the west, the flat alluvial plains stretch over the valley while the 1234m high granitic Gunung Bujang Melaka dominates the southern landscape. The dome shaped granite mountains facing the eastern flank is Gunung Chantik.

Entering the serene valley of Sungai Siput (South) village, one could imagine how much of Kinta Valley was like centuries ago. There was the characteristic twin-humped Gunung Gajah towering over the western horizon and then there's the sheer dolomite cliff of Gunung Tempurung soaring hundreds of metres above the thick emerald forests which overshadows the valley below. In between these giants stood minuscule wooden shops and houses with reflective pools of water surrounding them, the remains of tin mining in the alluvial flat lands in the heydays. It is here that I met up with the Malaysian Karst Society (MKS) members to gear up before heading into the hills. 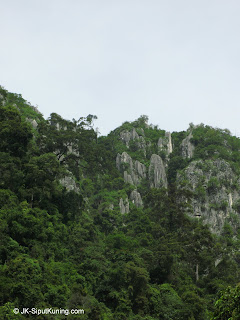 Pinnacles on the southern peak of Gunung Tempurung.


We followed the dirt road winding between G. Tempurung and G. Chantik. The vegetation here are mostly of anandara belukar (regenerating bushland). I found some common pitcher plants (Nepenthes gracilis) climbing on trees. 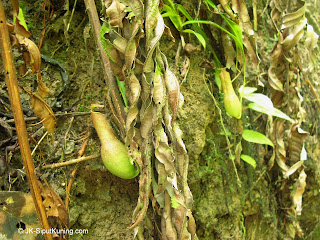 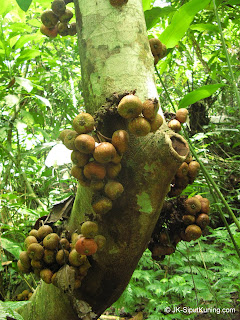 
After crossing several kilometres of muddy road with landslides in between, we finally arrived at the entrance of Gua Anak Tempurung, literally translates as the Tempurung Child Cave. There were man made rock barriers on the banks of the stream flowing into the cave, signs of human disturbance. I tried locating landsnails around the thickly vegetated banks. Strangely enough, little was found in this location apart from some broken Dyakia lahatensis (De Morgan 1885) and Cyclophorus malayanus (Benson 1852) shells. After a quick briefing, we entered the cave through the upper dry entrance (there's another wet entrance nearby). 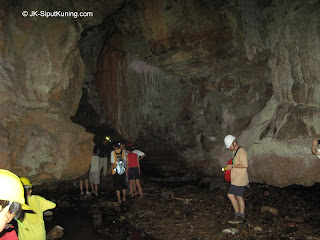 The chamber at the entrance of the cave. 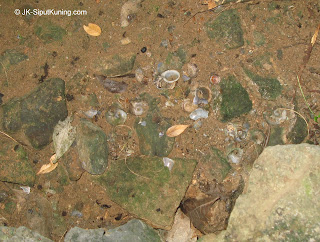 A Cyclophorus malayanus (Benson1852) shell midden. Predatory birds probably used the rocks here to break the shells to extract the animal inside. 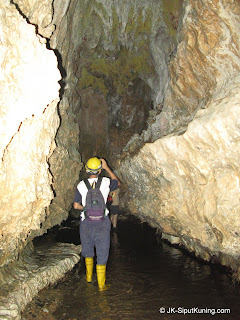 The entire cave passage is wet as a stream runs its course across the length of the cave.


Being a river cave, Gua Anak Tempurung is wet throughout its passage although some dry areas can be found in larger chambers. Spanning 1100m, this cave houses myriad of interesting subterranean organisms such as cave crickets, long-legged cave centipedes, the endemic primitive trapdoor spider (Liphistius tempurung), blind cat fishes, bats and possibly freshwater crabs too. Most of these organisms concentrates on the dry guano-sand banks of the cave stream. 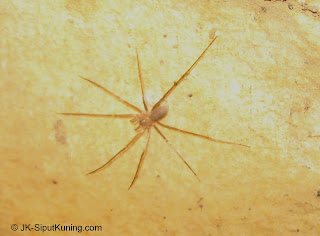 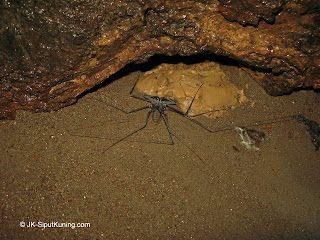 A tailless whip scorpion Sarax brachydactylus (Simon 1892) scurrying for cover. This creature is often associated with wet caves and are fairly widespread across the world. 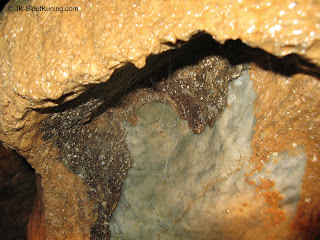 Silk strands betrays the presence of rare glowing cave worms Arachnocampa species(?) . It is famous in Australia and New Zealand due to them glowing in the dark by their thousands, much like a starry sky. 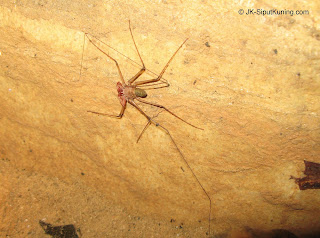 Another species of tailess whip scorpion? or perhaps a molting form of the same species? 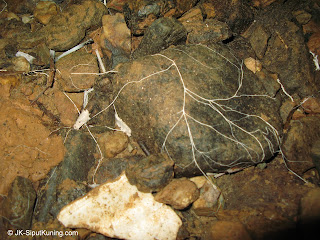 Fungi growing on a rock covered with tiny particles of organic matter. 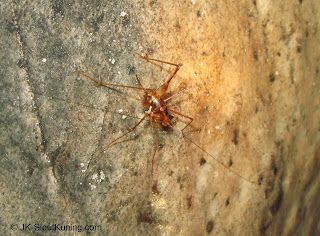 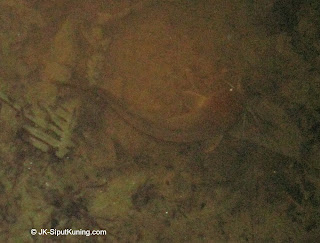 Surprisingly, there are even cave catfish Clarias sp. here. This fish has evolved its eye to blind or semi-blind conditions due to the absence of light in the cave.


Besides that, the cave's historical significance can also be viewed along its walls and dry stream banks. 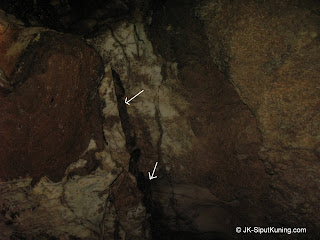 A tin bearing vein in limestone fissures. These used to be mined extensively by the Chinese in the early 20th century until it was banned by the British administrators who found them too dangerous to be worked on. The veins here are fondly called Jehoshaphat veins by geologists. 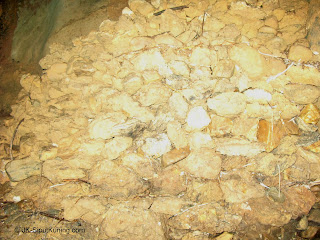 Rocks are piled up to form a bunker as a barrier for the communist insurgents against the government forces back in the days of Malayan Emergency in the mid-20th century.


The highlights of the cave is of course the impressive limestone formations including stalactites, stalagmites, cave straws (thin, young stalactites), cave "teeth" and many more. 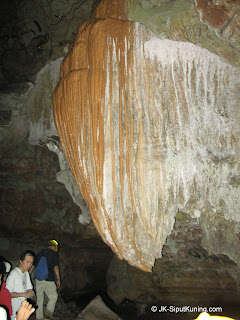 A large stalactite in one of the chambers. 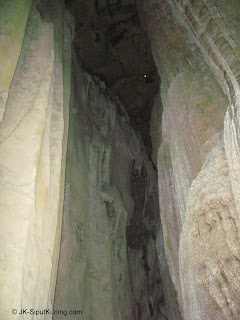 The tall but narrow chamber along the cave passage. 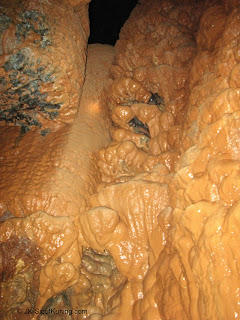 Brown stains on the speleoterms are the products of iron oxide mixing with calcium rich water. 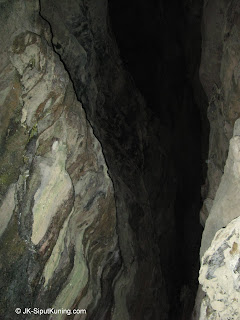 This chamber is easily 30m high. 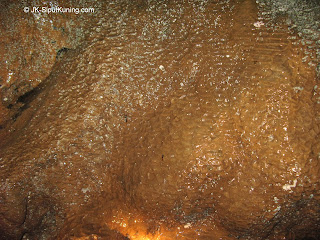 A miniature "cascading" flow stone. This is a rare sight. 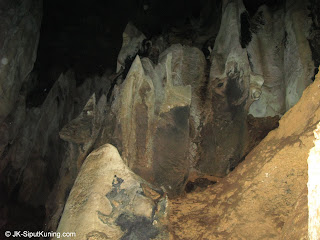 The scenery inside the largest chamber in Gua Anak Tempurung. 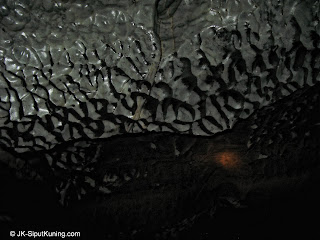 Black and white wave lines of marble polished by millions of years of flowing stream water. 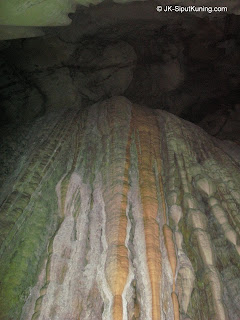 An exceptionally tall stalactite stretching all the way to the ceiling of the chamber. 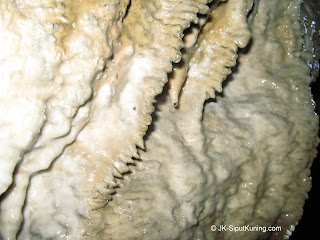 These serrated teeth-like stalactites are rather rare in Malaysia. According to our guide, the only other location with several structures like these is in Kedah, northern Peninsular Malaysia.


After two hours in the pitch black with only torchlights guiding our way through the cave, dim sunlight finally breaks from a cave opening. We have reached the end of the cave.

We stumbled out into the sunlit forest beside the white cliffs. There is a swamp near the cave entrance with broken shells of Pollicaria elephas (De Morgan 1885) and Cyclophorus malayanus (Benson 1852) fallen from above. Scanning the algae covered bluish-green limestone wall in the shades of the forest canopy, I could spot some endemic Monophyllaea elongata plants growing in clusters. While far above them, another iconic Kinta limestone endemic flora Paraboea verticillata displays its silver rosettes under the sun. 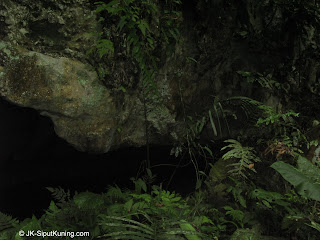 The scene outside the cave exit is filled with vegetation-typical of the Kinta Karst area. 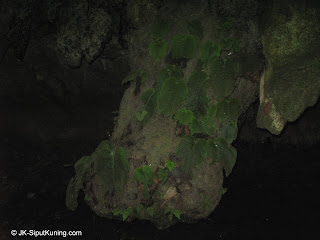 
Finally, we emerged from the bushes and into the logging road and made our way back to civilisation.

The Tempurung-Gajah complex indeed holds lots of fascinating secrets awaiting discovery. The ecological, geological, historical and tourism value of these massifs far outweights the value of cement, marble and other limestone materials extracted from them. Hopefully, they will remain as they are- rugged and majestic, yet serene and beautiful for generations to come.

Interesting.
However I don't think the silk strands are from glow worms, they are from gnat fly larvae.
cavingliz

Thanks for the correction. Anyway I'm curious to know if there are any glow worms in Malaysia's caves. According to some websites on Mulu Caves, there seemed to be certain species living there. Are they really glow worms?