The oddly coiled shell of a tiny snail has left scientists puzzled. 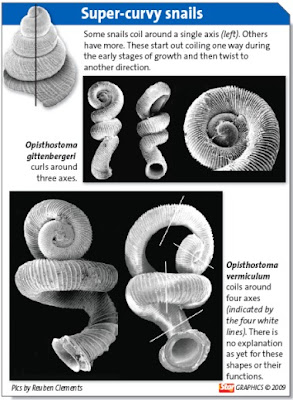 IT measured no bigger than a pinhead, yet when a scientific description of the microsnail Opisthostoma vermiculum was published in the scientific journal Biology Letters in January last year, it created a stir in the scientific world. Various websites discussed the find, and it even got its discoverer Reuben Clements into the New York Times and the scientific journal Nature.
Last month, O. vermiculum was in the news again: it was voted into the list of top 10 species discovered last year, alongside Sabah’s Phobaeticus chani, the longest stick insect ever found.
Ironically, on either occasion, O. vermiculum did not make it into local newspapers despite it being new to science and found only on one limestone karst in the Kinta valley of Perak.
But that’s hardly surprising seeing that snails, and one that measures a mere 1mm at that, are unlikely to match the appeal quotient of mega-fauna such as the orang utan, tiger or elephant.
But within the field of malacology (the study of molluscs), O. vermiculum has created quite a buzz – and all because its shell coils on four axes, a first in the world of snails. Most of us would be familiar with shells that coil tightly around a single axis, making for a simple spiral. But some shells have two axes, starting out coiling one way during the early stages of growth, and then curving by 90° or 180°.
Many species of Opisthostoma snails have three axes of coiling, with a final twist at the end of their growth. The O. vermiculum, however, has defied the established rules of shell growth and form by creating a home that twists in four independent directions. That is one more than any other known snail........

(This post is an extract from an article in the Malaysian daily, The Star. It is reproduced here for educational purposes. For the whole article please visit:

Good to hear about your interest in snails. I'm Reuben Clements and I got your contact from your uncle David. You can email me at rclements@wwf.org.my if you wanna meet up one day to talk about snails.

My name is Miguel, I am a Spanish collector and love snails like you. Do you feel like swapping some specimens? If so, contact me at iberianmalaco@gmail.com

Congrats for your site, it is great!